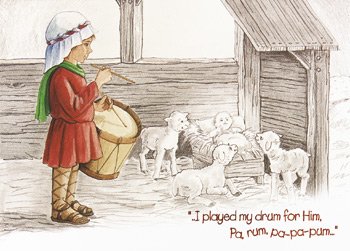 upon his shoulder dominion rests.

They name him Wonder-Counselor, God-Hero,

We hear these words proclaimed by the prophet Isaiah in one of the Mass readings for Christmas. These words attest to a wondrous mystery of how the might of God is revealed in the vulnerability of a child born to us. Yet, not just any child but one who is poor and dependent on others for care and welcome. Herein lies a paradox that not only comforts but also unsettles: how can this God born to us as a poor child be capable of redeeming and bringing peace to our troubled world?

During a Courage retreat this past Advent, I found myself reflecting on how God comes to us in the Infant Jesus as the Prince of Peace. In my prayer, I imagined myself at the manger and wondered who I would be at the Nativity scene. Might I be one of the shepherds? Or one of the Magi – as I was hoping to be? Could I even be one of the animals? It was none of these.

Instead, I heard this in my heart – ‘You are a drummer boy.’

How strange and unexpected! Yes, the drummer boy made popular in the Christmas carol, who had “no gift to bring” except to play his drum for the Infant King Jesus.

Historically, drummer boys served as messengers in the American Civil War. They were young boys who played an important role in sounding the military orders of officers at battle through their drumbeats. They also played their drums to keep the marching soldiers together. And when they were not needed as messengers, they served as stretcher bearers, bringing the wounded to medical care. Drummer boys risked their lives to be on the frontline unarmed.[1]

Yet, the drummer boy at the Nativity scene is not to be a messenger of war, but an announcer of God’s peace. This is who I am challenged to become: an ambassador of God’s Reign of Peace, a drummer boy learning to listen and play to the beat of the Infant Jesus who is the Prince of Peace.

As a Catholic and gay person, the peace I find on Christmas is in knowing that through Jesus’s birth, God takes the risk to be vulnerable and alongside those who are at the margins. The wonder of Christmas is the mystery of the Incarnation, by which I am assured that God continually meets me in my everyday life that is messy but graced. As theologian Karl Barth has expressed, even the closed inns of our hearts cannot stop God from being born more deeply in the stable of our lives.[2] There is a peace that flows from this promise and blessed assurance of God with us – as Emmanuel.

And yet, this peace also gently demands that I live it courageously with others, bearing witness to God’s reconciling love. The mystery of the Incarnation is the wonder of God’s immense generosity. In the Infant Jesus, we behold God entrusting Himself to be held and cared for by fallible human beings. In the Infant Jesus, we see God risking (and perhaps expecting) the danger of vulnerability and disappointment of rejection in order to be with us.

The drummer boy that I am and will become does not play alone. The work of peacemaking is the mission of a community. In this regard, I am grateful for a community of friends that God has providentially given through Courage. On this Christmas, I praise God for each of you. May Christ born in our hearts lead us as a community in the New Year to play, dance and sing to the rhythm of God’s peace, love and joy.

As a gift to all our readers, I would like to share a poem I wrote while contemplating the wondrous birth of our Lord Jesus Christ as a drummer boy. Who might you be at the manger? Might you be invited too to play the drum for him?

Alfred is journeying with Courage and happens to have an interest in theology and spirituality. He writes occasionally, tries to read widely, and enjoys the company of friends over good food and coffee.

The opinions and experiences expressed in each entry in the Reflections page belong solely to the original authors and do not necessarily reflect the view and policies of Courage Singapore. Some entries have been edited for length and clarity.